Friday marked the final day of the ESRI User Conference in San Diego. We were up and out a little earlier than yesterday, as I missed a little too much of the first session. Jay had given me a juror day pass that he never used. I scratched off the date and boarded. Immediately three cops boarded and performed the only ticket check I encountered during the week. He did a double take on my ticket only to check the date, otherwise I was clear. I then had a look at the (obvious) fine print that stated transferring the ticket to others was illegal and punishable! Awesome. As I walked in all the posters were being dismantled as if my little world of the past week was falling apart. Not that I was upset... The session I chose for the morning was on advanced cartographic symbology and I found it to be very cool and hopefully very useful. Then at the end someone asked about the license level needed and I was totally left out to dry! Boy was I pissed! 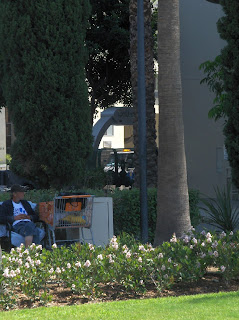 While I was angry about my ArcGIS license level, at least I saw a lot of stray shopping carts
The last official part of the conference was the closing session. It was in only one of the bays (A) and featured Jack and the senior staff up front. We watched a nice slideshow and then Jack went over what he heard about the conference. I would gander that they made my slide before the conference even started... Also during that time all the poster and software awards were given, the one I wanted to win for US power plants did win one category. Very cool. Then there was the interaction part with conference members about their observations. Then around noon it was all over! 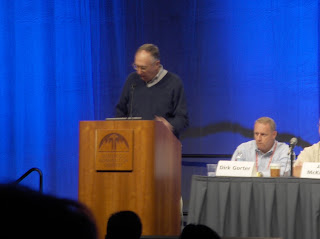 Jack moments before he joked about everyone taking their clothes off
Following which I wandered up 5th and settled on a Persian restaurant. I had a very delectable Persian salad (cucumber, tomatoes, spices) along with some very quality shish kabob. I then went up to the 5th trolley station, catching a Blue line straight to Old Town. I did want to make special mention of all the stray shopping carts I have seen in San Diego - WAY more than I've seen in other metro areas since my stray shopping cart epiphany. The rest of the commute back was not bad - Jay was actually home as he had a half day with their offices moving.

After a very pleasant afternoon of relaxing, dinner was at the Dumpling Inn, a very small (northern) Chinese restaurant that was anything but normal. We sat at a big table and ordered quite a fare. We ordered it convinced we would have leftovers for the next day. However, the three of us could be described as Coach K's next "dream team." That night we began to enjoy the spectacle of 2008 Summer Olympics in Beijing. Now personally, I am disgusted by the communist Chinese government, and this whole thing mostly makes me sick. I can't believe the international community would let such a horribly oppressive government host an event like the Olympics. If the horrible regimes of most OPEC powerhouses make me nervous, China makes me tremble with fear. What could I do about this? I honestly can't wait for the cycling events (minus BMX), triathlon, and the marathon. We were up quite late, especially with me going on a long run tomorrow morning.
Penned by Publius at 19:27