The ESRI Dog and Pony Show

Monday morning marked the beginning of the ESRI User Conference. I would assume most folks have not heard of ESRI - it is a private company, led by his geographicness Jack Dangermond, that puts out GIS (Geographic Information Systems) software that is rather ubiquitous in the field. I use it on a daily basis for work and it has somewhat of the Microsoft Office monopoly thing going. Except it is actually useful and is designed by innovative people. Every year they hold a user conference in San Diego, attendance is in the 14,000+ people neighborhood. I have been curious about attending this "circus" for about 5-6 years now, so this was finally the big opportunity.

That morning Jay drove me to the Old Town trolley station. Along the way I recognized the street I ran down in 2001 towards University of San Diego. He helped me buy a 4 day pass and even by the time I was on the trolley I was talking with several fellow participants. One then would switch over to the Orange line to reach the Convention Center, which is quite the spectacle! 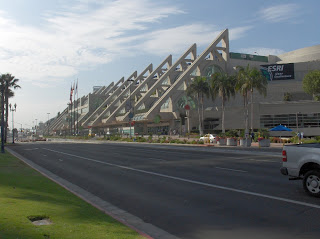 How many geography nerds can you fit in this building? Let's use Arc$$$ to find out!
The day was spent with everyone in the big plenary session. I tried to get relatively close, and by total randomness I sat with folks from North Carolina. I knew two of them, one was Rob, who works for Char-Meck. Anyway, the whole thing was a totally scripted dog and pony show. I've watched (but not attended) countless Steve Jobs dog and pony shows, and this felt exactly like it. For the most part I think ESRI and their products are great, but obviously I don't feel the passion as much as for Apple. Nor would Jack consider selling me a share of his cash cow. You can see a few official ESRI photos of the plenary and conference. There were a lot of demonstrations of new features for ArcMap 9.3 (of which I did get a copy a few weeks before heading out). "Aren't we great?" CLAP CLAP CLAP. 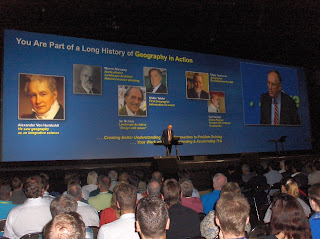 GIS icon Jack Dangermond servin' it up for his GIS peeps
During the break I hung out with Rob, and ended up going into the Gaslamp Quarter and up to a Mexican restaurant he liked. Since Rob also taught his first class at CPCC this Spring, we talked a lot about our experiences.

That afternoon was more of the same, but good more of the same. At one point this sixth grader Molly got up and spoke to 14,000 people about her project looking at race/income trends in her St. Louis neighborhood. Basically the neighborhood was divided - you were either privileged or not. I definitely gave her a lot of props for speaking to such a big group! I remember I gave the graduation speech when I was in sixth grade - hmm, there must have been 300+ people in that gym (which has long been razed to the ground). It was still uncomfortably scripted to me, and Jack on the cuff asked Molly where she lived in the neighborhood. Oooh. Bad impromptu question. Obviously she was white and came from a privileged background. Of course he didn't directly mean it as that, but it was nevertheless out there. The keynote was the director of the botanical gardens there. I had not heard of him, but he was interesting and enough of a visionary to keep my interest. 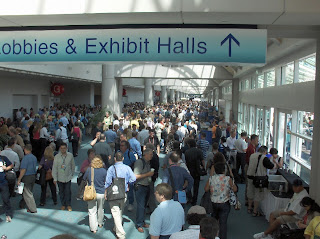 I do my GIS work by myself. This is somewhat of a change for me!
Following that the map galleries were open. I spent most of my time in the special Conservation room (I never even saw the 90% of maps in the main Sails area). It didn't take me long to spot one of the more annoying "rock star" classmate of mine from Duke. I wondered as I sipped on my chardonnay whether to talk with her, but I really didn't talk with her then and she was obviously still causing the boys to center round! In the end I walked away. The real treasure was meeting Bob and Brenda from TPL. I've been working with them on the Carolina Thread Trail project but this is the first time I met them in person! 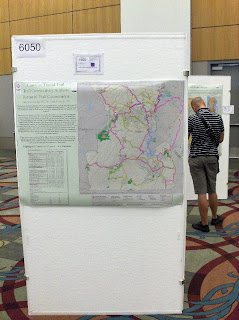 Hey look, I recognize that map!
That day I had lugged my CLC laptop with me in my backpack so I researched how to get back "home" without having Jan or Jay picking me up. it turned out to be rather straightforward. I retraced my steps with the Orange and Blue lines to Old Town, then took a Green to Fashion Valley Mall. From there I caught a 41 bus that dropped me off on the corner of Genesee and Marlesta. At that point it was a ten minute walk up the hill - not bad!

Dinner that evening was a new experience for me, a Korean BBQ joint. The grill was in the center of the table and there were bowls everywhere! I probably ate enough beef to last me through the remainder of the year!

Of course a big birthday shout-out to longtime (can you say elementary school?) friend Alvaro, who just happened to be here in San Diego a week ago for the gargantuan Comic-Con. Apparently over ten times as many people are into comics as compared to GIS.

I recognize Alvaro but didn't see this when I was at the Convention Center.
(Photo credit to paparazzi that was following Alvaro)
Penned by Publius at 18:59