The Run For the Money event in Gaston County is definitely not your typical Saturday 5K. This event, started in 2003, is focused on the community first. For anyone that shows up that morning to downtown Gastonia they are greeted by lots of energy, booths featuring all the non-profits in the area, karaoke singing, and even aggressive women dressed up as cats trying to distribute raffle tickets.

The main focus for the event is help non-profits in the county raise money. The foundation does this by matching funds raised. My employer is only one of nearly 100 non-profits that leverage the generous match (usually around 70% for the first $10,000 raised). There are also other ways for these groups to raise money, such as the karaoke contest and having an outstanding booth.

The Foundation also sets aside $11,000 in prize money for the 5K event. My first time running this 5K was back in 2004. Back then it was located off Garrison Blvd and I ran a 21:30 (6:55 minute mile pace), a PR for me at the time. However, it was also clear that I would never win any prize money. The prize structure awards $1000 for the male and female overall finishers, then $500 for age group first place (ten year increments), and $250 for second place. So as I continued to participate it and made more running friends in Charlotte it dawned on me the way to do this was to recruit top talent to come out and race.

Each year the event has drawn more and tougher competitors. Last year there were 570 finishers, and this year that number grew 32% to 750. The 2008 race was probably the best edition for the Conservancy, with Paul and Rebecca taking overall awards. This edition I knew would be more of a struggle, as Paul was very clear to me early on that he was not going to be in the shape necessary to win overall. I lost quite a bit of talent, including our most consistent money winner, who also happens to our site steward at the Eastover Ridge property. Thankfully I did happen to find replacement talent in the M50-59 category with Pete. The weekend also coincides with the Boston Marathon, which definitely hurt the shaping of the team. That Saturday also coincided with RaceFest, the big spring half marathon in Charlotte.

The weather for 2009's edition was just gorgeous, sunny and 58 degrees, with a gentle 4 mph wind. Upon our arrival I sought to gather intelligence on the new course. Paul was out here at 8AM to check it out. His comments were that it was tougher than the old "industrial" course to the east. Some rollers for the first two miles, then a tough hard hill, followed by a gradual ascent up to the finish line.

The race experience here always seems to be the same for me. I have always had the expectation of being able to break 20 minutes, but I never specifically train for these distances. So I suffer each year and pull back. I just seem to be more into the endurance aspect of longer events. Anyone who has ran a 5K in under 22 minutes, or even longer, can tell you how painful they are!

It was the general consensus that the 2009 course was much nicer, winding through nice shaded residential areas. My role was similar to last year. My main concern on the female side was closely watching Allison (our "competition," but still an awesome person), most noteably her spacing with Rebecca and Melinda. There was no question in my mind, unless one of the non-profits recruited Megan Hepp, that Jocelyn would once again take the overall female win (she won it all in 2007 under the pseudonym "Jacelyn"). At the Mile 1 marker I paced in at 6:20, technically under what I needed for miracle 5K, but I knew that was not going to last. At Mile 2 I came in at 6:47, losing steam in steady motion. It was there that we hit the toughest hill of the course - it was rather steep but not all that long. I was still in the game to see that Melinda was doing well enough, especially since the only female I spotted anywhere near behind her looked to be in the F20-29 category. The rest of the race was just pain pain pain for me. I happily embraced my central belief that was you reap is what you sow. And I didn't sow any beans for this race. My efforts were much more concentrated on getting the best talent on our team. During this time Bruce came up alongside and eventually moved up. I had slid over a minute back at Mile 3 to a 7:26 pace, finishing the last tenth at the same pace. I finished 52nd at 21:42, a 7 minute mile pace. Blah. 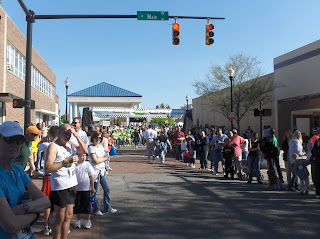 How fast could you make it to this line? If you try hard, it'll hurt!
Of course after finishing and getting over "so I'm not going to die after all" hump I obviously wanted to know how everyone did! After seeing Cody Angell at the start line, I was not surprised to hear Paul did have to settle for second place this year. Cody did take 13 seconds off Paul's winning last time last year, winning $1000 for Belmont Abbey with an incredible 5:09 pace. Paul did manage to stay in the 16 minute window (but barely) so kudos for him! It seems almost certain that would be good enough to at least take $500 and first place in the M30-39. A newly married Stan the man was also found on the pavement. For claiming to be fat and out of shape, his time around 19 minutes that very respectable. The word around the campfire was that Jocelyn did in fact win easy. Outstanding.

Most of the crew went for a cool down run while I ambled around the booths, enjoying the sunshine and whatnot. It was especially awesome to see such a large presence this year with Girls on the Run. Thankfully they started the awards ceremony earlier than last year. I was a little worried as some of the CLC runners did not get back in time, but it really wasn't big of a deal. They started with the age group awards young and worked their way up. I was really impressed with some of the young talent. I've never found anyone to run those categories though. With Ma Bell at Boston this year, our team did not feature an age group finisher under 30. 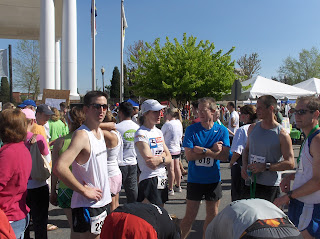 Stan, Melinda, Bruce, Chris, and Pete milling about. Check out those other butts! ;-)

Perhaps the great amount of competition this year was in the M30-39 category. With his second place finish Paul took the $500. Unfortunately with the stout performances of Keith, Stan, and myself (yeah, right!) none of those were good enough for second, as the placer was only 10 seconds behind Paul! 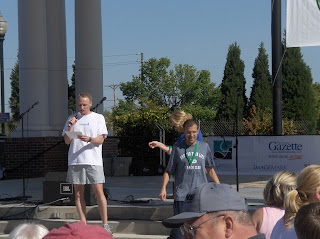 I wish I could be as "out of shape" as Paul!
As for the females in the same age groupers, my congrats go out to Allison, who apparently slipped past Rebecca for the top age group prize. Allison was very consistent with regards to her performance last year. Rebecca was obviously disappointed, but she still won $250 for the Conservancy! Rebecca, if you're out there I love ya kid - you know you're awesome and you'll quickly learn badminton blows - you will bounce back!!! 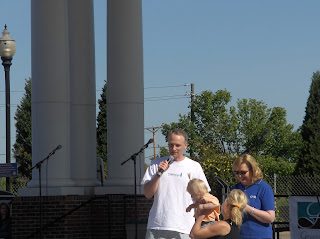 Rebecca showing off the litt'l puker to the presenters
The Conservancy's real strength this year was the 40-49 category! In the male category Chris hammered out a near six minute mile performance, besting his competition by over 30 seconds (which is a lot of time for a race like this). On the female side, last year Melinda was bested and had to settle for second place. This year she ran 21:15 and actually won big. Melinda and I were musing what happened to the woman from last year. Turns out she both graduated to F60-69 and ran slower. That was very exciting for Melinda! 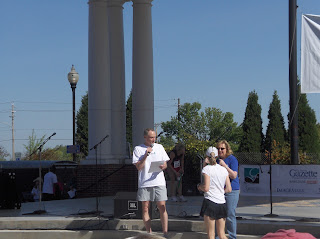 Melinda receiving her well-deserved award for first place!
Over the years that the Conservancy has fielded a team, the safest win has always been in the M50-59 category with Mike's amazing performances. Unfortunately he is working through some hip issues now. An equalizing amazing athlete, especially for his age is Mr. Pete. It's very rare to find talent in that age group, so I feel especially fortunate. Pete's time for 2009 was even a few seconds faster than Mike. 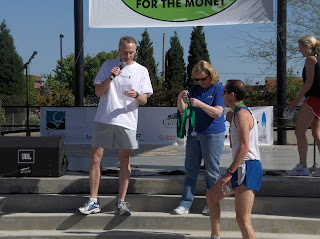 Pete going over the litany of races he won over the years
The biggest surprise, hands down, was the Conservancy's rough kick from the throne. A man named Bryan Allf came in and ran a 17:58 - UNREAL! We were all shocked, a real indication of the kind of talent that now comes into this race. The last prizes to come out were for overall. And of course Jocelyn had her own cheering section! One of these years the race organization might even spell her name right or even better yet, pronounce her name correctly. I know the feeling (they spelled my name wrong- d'oh) Who on earth is JACELYN SAKORA?!? Two time RFTM winner, that's who!
I feel so blessed to have so many friends come out and run for our cause. I want to give very special thanks to the one volunteer who has, in my opinion, made the largest impact. That of course is Nancy Pierce, who has tirelessly volunteered her photography (and running!) skills to advance our mission of land protection in the Charlotte area. Kudos to Nancy!!

So overall, many thanks to Team CLC, who volunteered to come out on their Saturday and race hard for a good cause. Our team raised $3,000 dollars to help advance land protection efforts in the Charlotte region - great work!!! 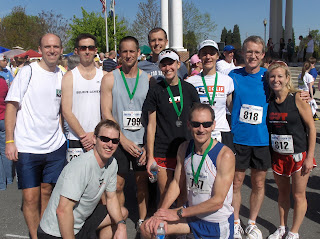 Haha, I swiped your group photo for my facebook. That was fun, hopefully RFTM won't be on Boston weekend next year.