The conference may have ended, but that did not mean sleeping in on Saturday morning. I was up around 6:20 and quickly dressed for my long run. I was both nervous about the run, given how little I had exercised this week and how much I have eaten! My plan was to run to University of San Diego via Genesee and Linda Vista and clock in four miles. From there I would turn back to Thornwood. Then it would be a loop around the neighborhood clockwise. The weather was overcast in the mid 60s. I took a new route down the hill to towards the long climb up Genesee. I was very curious about the canyon beyond and the trails there. It made me think about my recent read of T.C. Boyle's The Tortilla Curtain. In the novel, an illegal immigrant couple live in a canyon much like the one I watched as I slowly ascended towards Linda Vista. From there it was more undulations and then down to the university. I stopped immediately at 4.0 miles, rested, and made the long journey back. The climb back to Thornwood was so tough! For the break I had to quickly use the restroom and then take in some fluids and granola bar. The last part was supposed to be another 4 miles. During this time I slowly began to lose my ability to hold an 8 minute mile pace. The sun slowly made its way out to haunt me. I got a little confused on a turn in Mesa College, so ended up adding about 0.9 miles to my total. It took about 1:54 and I was thrilled to do so relatively well given the circumstances!

After cooling down in the relaxing courtyard, Jay and I went to have a late breakfast/early lunch at Point Loma Seafoods. This was quite the unique business, having a wide variety of fish and seafood for sale by the pound, along with a wide variety of wines, including the now ubiquitous Chalk Hill chardonnay. And of course, they served up our lunch. Jay (and apparently his sister) were big fans of the shrimp sandwich, which came on sourdough. I had to give it a try, along with some onion rings, clam chowder, and lemonade to wash it all down. What a fantastic combination! I seriously though about coming there with a cooler and filling it up on sandwiches. From there we took "the long route" north through the gaudy Mission Beach and Pacific Beach up through La Jolla. This being just another sunny day in San Diego (and a weekend to boot!) there were just people everywhere! Jay had hoped to show me the Torrey Pines State Natural Preserve, but it was too full so we doubled back and ended up at perhaps a more interesting locale, the Torrey Pines Gliderport. It was downright fascinating to watch all the action, and by action I mean people parasailing and of course, the clothing-optional Black's Beach far below. Next time I will bring very powerful binoculars - to watch the distant paragliders of course. 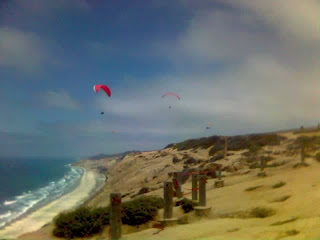 There's naked people down on that beach - but probably not the kind you want to see
Today I was able to see the men's road cycling race in the pure goodness of hi-def. Last night I had tried watching the live feed, but it was very jerky and had no commentary. Somehow I managed to avoid reading who won before NBC chose to show it. I was very confident it would be someone from the strong Spanish contingent - they just had too much firepower. I noticed though NBC inadvertently gave away the winner! While at the front desk, behind they had video shots of all the sports. And one of the shots showed a man in a Spanish uniform winning the race! Wow, what a gaffe! It didn't take much to see that Sammy Sanchez would win when it came down to the final breakaway. But what a move by Fabian to bridge the gap - he totally deserved the bronze!

For dinner that night we went quite a distance, heading north to Escondido. Our destination was the Stone Brewing Company. When I was on my recent trip to Providence the question was posed to my dear friend Eric about his favorite beer - the response was the Arrogant Bastard Ale. So that's why we were here! Additionally, Jay had heard from co-workers that the food was good. It was in a new business park and was quite the ($13 million) facility. We had gone hoping to get in without a reservation - this was one busy place! We strolled through their gardens and the wait wasn't long - the dream eating team received a very nice table outside. Both Jay and I began with the signature brew. 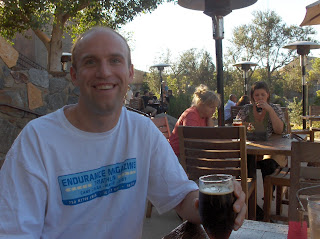 There is at least one arrogant bastard in this photo...
I really enjoyed it, but it wasn't the best beer for my palate - I especially do like some amber ales. It was a relatively strong pint, and both of us got pretty buzzed off that drink. It was nice to see the owners/chef were using the Slow Food movement. The menu was a lot more interesting than I thought it would be. We settled on a potato skins appetizer that was okay, along with splitting an entree of the Mac and Beer Cheese. Jan tried the duck tacos, I got the chicken snitzel, and Jay just had to go for the special filet mignon with a scallop. The food was very decent; a powerful entry into the San Diego 2008 fare but not spectacular. For my second beer I went with a 2003 Russian Imperial Stout, which I did enjoy more. Since Jay's dinner was not cooked correctly (so high maintenance, that guy!) he got a free (third) beer. The double Bastard was so bitter I couldn't believe it! The experience was what really counted though! 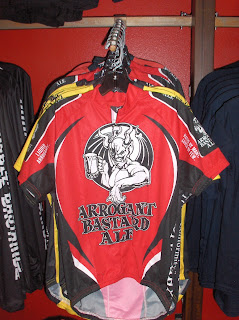 I think I would have gotten more for my money with this bike jersey...
Penned by Publius at 22:39