Off To The Races! (and not the conference dinner)

After yesterday's early start, on Thursday I managed to sleep in, requiring a live individual to remind me I had to get up. After getting a tour of the Old Town area next to the station, I made my way downtown, waiting once again to hop on a Orange line to the Convention Center. There was a man about my age who asked about what was going on at the convention center. I explained about the geographical/cartography aspect and he told me about how he was wowed by Google Earth. We laughed about Comic-Con, he obviously had as little interest as I do. I then was punished for my efforts to actually take some sidesteps up to the higher level. Apparently I have to be a lazy conference attendee just like everyone else.

The word was out that Jay's office/department was going to the horse races at Del Mar that afternoon, so I was in fact going to miss the big party/dinner ESRI celebration at the park. So I posted a for sale sign on my dinner ticket. I then worked my way, quite tardily, to the session on geodatabase topology. I got a call quickly for the ticket, becoming "one of those people" who doesn't turn of their mobile during the presentation! No one responded, so I went back in but actually left early (my first seminar this week which I did) and went to catch the tail-end of a seminar on shortcuts/trips and tricks. Around the time that ended I got another amazing call about the ticket - a guy who had posted a free ticket on the board called me to accuse me of taking his ticket and then selling it! Wow! I told him I wasn't "that guy" and my ticket was still attached to my namebadge. Jackass. I then wandered to the board area and got the call back from the guy. He came up from the exhibit hall and paid for the ticket - score! Now I had money to gamble!

For the last session that morning I went on a session on printing/exporting, especially focusing on ArcPress and new capabilities with Adobe Acrobat 9 for layer and georeferencing support. Very interesting! Once that was over I went back to the trolley system and made my way to Old Town. I seemed to recall we went to eat one night with Jay in 2001 to this tourist mecca. I wandered around looking for quick/cheap eats and found at the Alamo $2 Taco Thursdays! Score! Jan then picked me up and went headed north towards Jay's office. 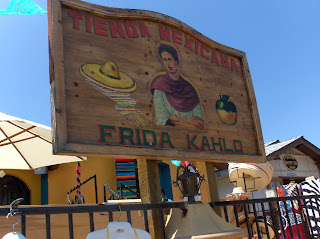 Would Frida have appreciated her likeness being used in a tourist trap?
Our destination was the Del Mar Fairgrounds for an afternoon of thoroughbred racing! This was a completely new experience for me, and quite confusing. We had missed the first of the eight races, and for the second race I watched and struggled to figure out the system for odds and everything under the sun. The race guide was like reading a Martian map. Did I mention how I felt like I was in another world that afternoon? It was just so different than what I am used to! 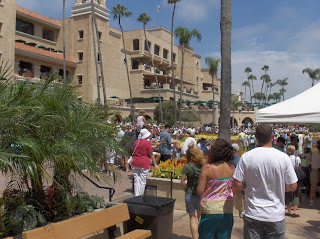 The front paddock area before going inside
By the third race we had figured enough out to get vouchers and punch in choices. I started real easy, taking a $2 show bet on Mr. Chips. The obvious choice that Jay bet on was onetimeatbandcamp, since I know Jay through Husky Band. The honorable predictor Brad Free (whose ability to predict races equates to his ability to spell) was leaning Jay's way but the actual results did not impress either. For the fourth race I placed two $2 bets, picking Public Image to win and You Is What You is - once again there wasn't anything happening there. No wonder I don't go to Vegas and gamble that much. It so complicated as well with the odds and pooled odds based on everyone's bets. It really is just like throwing your money away. That of course, is the observation of someone (me) who had no idea how to bet on horses. 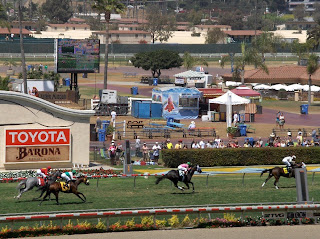 The finish of an unknown race which I probably lost money on
My break finally came on Race 5, when I put $2 on a place for Smooch and $2 on show for Helmsgold. For the latter, I liked the Lord of the Rings feel to the name, but really, I found a section in the program guide that listed the jockey as second in the rankings. Very exciting - that pulled in a big $5.60! As if I were really at the fairgrounds on the rollercoasters, I hit three duds for the next races, placing a show on Toll Road, a win on Afleet's Desire and a place on Time Tosay Goodbye. My big break came in race 7 when I correctly picked a Quinella (and technically I got the Exacta right, but didn't chose it) and won $49! 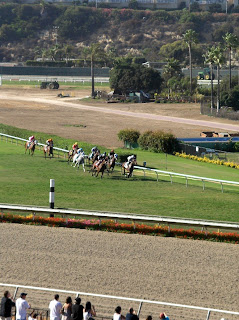 The start of (turf) Race 7 that changed my fortunes! Thank you Carl Orff.
For the record, my $2 would have turned into $64, especially since that was the order I wagered on. Okay, so I definitely went a little crazy down the stretch for that race, but last time I checked that was the whole point. For the last race, I thought about just walking away or taking "the house (and ESRI conference dinner)" money and placing a ton of bets. Memories then came back to the last time I saw Jay in Vegas. It was a few years ago and on that night I was doing very well at Blackjack. I remember from there (during my Blackjack training and a comment by Bill Pitzner in 1996 Reno) to just go for it. In Vegas I was rewarded handsomely! In Del Mar I did again, which included a very expensive Trifecta box on Brad's predicted finish (JB Wine, Coastal Souvenir, and Brave Justice). That all went up in smoke - the closest I came was $3 bet for Tom Quinn to win. The real story for this race was Jay's co-worker Danielle who put 10 cents on the Superfecta (choosing the order 1-4 correctly). The payout was $867! Turns out though she didn't box her bet (which would have cost her a whopping $1.60) and so she walked away with $4 instead. Her young son, who got all jacked up on the news, was beyond distraught. Another of Jay's co-workers Rory probably did the best of us, winning about $330 during the middle. As for me, I walked out with a $5.60 gain (really, a $14.40 loss). Still though, it was from the money I made from selling my dinner ticket, so I really felt like I had nothing to lose! This was a very fun experience! That goodness there is no horseracing anywhere near where I live.

That night we went to a sushi restaurant, Edo Sushi, near Jay's work in La Jolla and it was F-A-N-T-A-S-T-I-C. Best sushi I've had - ever. Specifically the shrimp tempura and salmon were of exceptional quality.
Penned by Publius at 22:41