This past Wednesday and Thursday was the second edition of the staff retreat for the Conservancy. In January we all gathered at Dave's second home on the shores of Lake James. Supposedly it was named for the great James Duke, who after he was done causing cancer in millions of people, decided to switch his efforts to destroying the natural ecology of the Catawba River and screwing everyone else who didn't smoke with an electricity bill. Not only that, Duke Energy stole thousands of acres of land which they never used for power generation. This land is now owned by their former arm, Crescent Resources, who is turning around this unused land
with massive upscale waterfront developments like The Sanctuary. Oh by the way, I went to the university spurred on by his family's cancer money. At least they are doing some great medical research to reverse such a horrible legacy. And through the Doris Duke Charitable Foundation, excellent initiatives in the environmental field.

Hey, who left this box here? This is my blog!
As we swung around the courthouse, I could not help but notice Chafin Rhyne's (the Rhynes are an influential family in Lincolnton who are very supportive of the Conservancy) bicycle shop had a big Swiss flag out front. No doubt this was a tribute to Fabian Cancellara's fab-tastic exploits at the 2008 Beijing Olympics, starting with an amazing gap bridging to take bronze in the road race and now gold medal in the time trials. I pondered whether I was the only person not going to the bike shop who would even make that connection. Our destination was once again the Courthouse Grill. Avoiding the large calzones (once again), I opted for a nice baked ziti and salad. Besides the lemonade being horrible, it was a pleasant meal. Before leaving Lincolnton, I advised the toaster's driver where the cheap gas was in Lincolnton, and then we had to get some mixed nuts. For some reason, we ended up with gum and the big issue of People magazine that had Brangelina family photos. Atrocious. But not quite as atrocious as Colleen's misunderstanding of how play the Big Red Challenge. Smart alec.

That afternoon most of us were able to hang out on the porch and chat since two of my colleagues were on their way from some meetings in Raleigh. Particularly interesting was to hear Kenni's story about how she got hired, which started two years before in 1997. 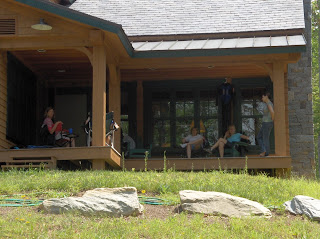 Who doesn't love to hang out on the porch and drink Coronas?
While these days "We'll keep you in mind" means "forget it" this story proved that some people are capable of following through on their promises over the long term. We grilled out for dinner and that discussed our status with the newsletter. 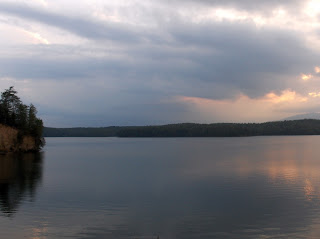 Near sunset on Lake James
I once again had to sleep in the upstairs TV room because of my "odd man out" as a, uh, man. There was a sleeper sofa in there this time but the mattress was thin and uncomfortable. Halfway through the night I switched over to the inflatable twin that served as backup.

Was up at 6AM to hopefully get a chance to swim across Lake James. It wasn't almost until an hour later that I hit the water - Dave and Ann manned the kayak. 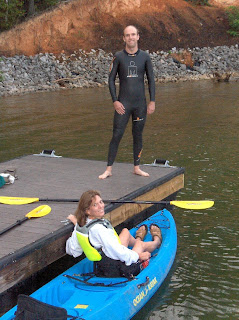 Ready to jump in for a leisurely swim!
They then guided me east across to Lake James State Park. It was roughly 0.65 miles. The water was reasonably warm and I wasn't heating up in the wetsuit. The chop was minimal and I made it across with relatively little effort in a little less than 23 minutes. 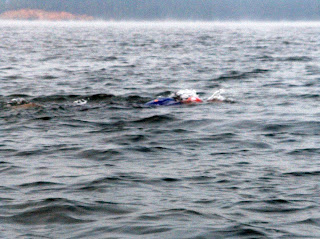 Cruising along Lake James
While I good feel myself slowing down, it certainly felt like we returned to the dock in less time. I could have done much more, which is obviously where I should be at this point! For the most part Kenni had some great taste in food choices, with the very small exception of some of the sugar cereals. For the heck of it, I balanced my breakfast with some Coco Puffs, which I've probably eaten like five times in my life. They tasted just like the item they were mistaken for by one of my colleagues!

That morning we tackled our own internal staff survey. The same staff survey was given in January. The results were not all that positive, showing a serious erosion in morale - most of which I would attribute to the soul-sucking exercise of accreditation by the Land Trust Alliance. The sandwiches for lunch were nice, especially with the home-grown tomatoes! That afternoon we discussed the upcoming board retreat, and I was struggling by this point. Unfortunately for me I wasn't wearing the Paris Hilton-style sunglasses Colleen had on, which allowed her to fall asleep without most (!) knowing. Stellar move! After that I was quickly hurried out the door so the master toaster driver could get to the paper store in Charlotte before it closed. Ironically, this is the store right next to my house, the one I've never visited. There's a surprise. It was mildly amusing. I then was back in Plaza Midwood in time for the Thursday night run there. Apart from the Volvo-driving Carissa, I didn't know anyone there and ran rather anonymously with the smaller type group, posting just over thirty minutes for four miles. I was pleased with my new rule that I would stop my watch on both Central crossings. I have no wish to get hit by a car to save a few seconds.
Penned by Publius at 14:08