An Afternoon at Sugaw Creek

On Friday we had our "official" celebration at work for our accreditation work. We ordered in Mama Ricotta's and I went for something bizarre, a large pizza with fried calamari, jalapenos, and some peperoni. I did not order the large because I was being greedy, but because I thought others would be interested. Well, at least two of my colleagues took the plunge. It wasn't all that bad. I saved a few slices for Monday since (as usual) I plan to run into work.

Shortly after it was time to ride home. I left around 14:00, the temperature was about 82 degrees and the conditions were quite sunny. My route to and from work is highly standardized, and I use my GPS watch to time four segments for daily analysis. After finishing two of the segments, I was cruising down Auburn. At the bottom of the hill, the street ends and Hartford runs perpendicular. I was gunning it for my left turn, obviously blowing the stop sign. Too bad there was a cop coming westbound. Whoops. I must be one of those cyclists giving the others a bad name. Of the 11 times I've completed this segment, my average time is 25:20 and today I came in with 25:12. Had I been stopped for a ticket I would not have counted that time anyway!

Suffice to say I was super stressed over this class I am slated to teach next week at Queens. I did find a nice outlet. I took Winston, picked up Julie, and headed out to Sugaw Creek Park to play the disc golf course there. It is a par 54 course with 5,220 feet. Compared to the pro level Renaissance course nearby my house, this is an easy venue. This was perfect on two fronts - most important Julie had never played before and Renaissance makes me cry. I thought I had been year about five years ago with my old co-worker Rebecca, but I mistook that for Kilborne.

It turned out to be a great afternoon. Winston was extremely hyper, so he was kept on the leash for most of the time, but on the back sections I did let him go. I must be one of those dog owners giving the others a bad name. I have about ten discs, and I thought the Shark would be the most appropriate single disc for her to learn on. I personally relied heavily on my beat-up Cheetah, which I bought as a package deal from my old housemate/landlord Sean a number of years ago. I really dig this disc, although I really should invest in a real distance driver. 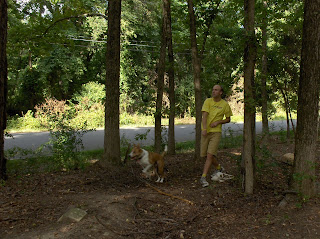 My favorite photo of the afternoon - too bad the disc had left the picture!
One could definitely see Julie's consistent improvement through the eighteen holes. Apparently she was able to use her intense putt-putt skills to cross over into this discipline. The course was a good fit for a beginner too, a number of the holes featured some wide open areas to help her gain confidence in the longer shots. While she took lots of shorter distance shots, she had two amazing sinks on the 14th and 18th holes. 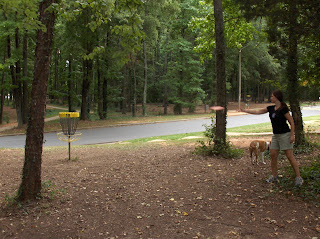 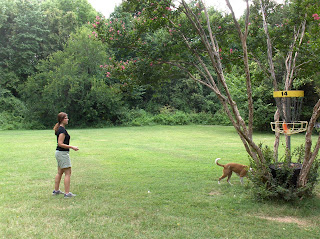 She sinks!
I started early with forehand shots and noticed I was just "on," relative to most frustrating days and obviously much harder courses. I ended up shooting 13 over par, which is very good for me! 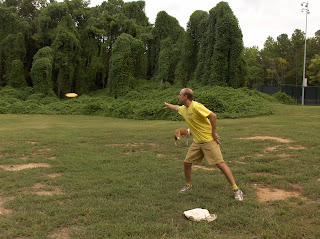 I had a yellow thing going on Friday...
We were out for about two hours. Once finished, we made our way to NoDa so Winston (and myself!) could experience The Dog Bar! We got there right at the 6:00 opening, so it was a little dead at first but then the canines started to roll in through the double gate! 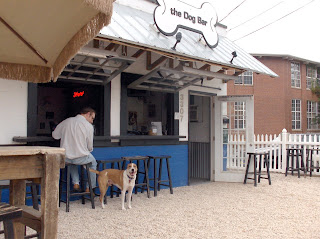 Winston first had to rely on human friends 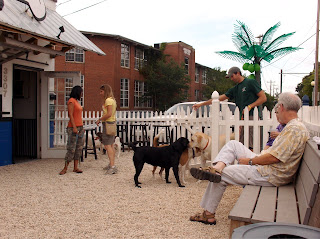 But that didn't last long!
As usual, Winston never attacked any dog, although a few (including Chewie) initially wanted a piece of him. But even those two eventually got along, running back and forth. Winston did do more of his (usual) share of dominance humping. But perhaps Winston's biggest party foul was knocking over my drink! After a while it was interesting to note he didn't want to hang out with the dogs there.

Afterwards we went to the Common Market to pick up some sandwiches and some Magic Hat Jinx, which got Julie's great logo design seal of approval, not to mention two seal of approvals for tasty brew. We watched the somewhat disturbing movie "Notes on a Scandal." Judi Dench is an amazing actress, although not everything she touches turn to gold (cough, Chronicles of Riddick, cough). All I have to say is that if I were a suave-looking 15 year old boy and Cate Blanchett became my art teacher, well, uh, why not?

Did you know?
The annual United States Disc Golf Championships are played nearby at Winthrop University?
Penned by Publius at 19:15