With the demise of the Sharksbite mailing list (and some may argue Sharksbite) and the disappearance of Old Asian Running Man, I thought Publius had seen his last scratchings upon this gentle earth.


Hola, amigos. I know it's been a long time since I rapped at ya, but I've had a fistful of problems lately. This all was wiped clean last Saturday when after finishing a 20 mile training run at record pace, I saw someone so special I forgot not only my strong run but every itchy fiber of a problem. I was cooling down in the Dowd Y parking lot when I saw what I first thought was a ghost towards me. It was old Asian running man! He was walking very slowly with whom I could only guess was his equally old wife. They were such a cute couple. (devout reader Bruce can attest to this sighting) I had not seen him for quite some time - my last sighting was Friday, September 2, 2005 when I was working on my hamstrings. He was lifting weights like a badass. Before that I had seen him numerous times running down Tryon, either dressed like an eskimo with thick gloves or wearing a simple white tank in the heat of the summer. Old Asian running man [aka OARM] is my hero!

Maybe I will ask him to train with me for my upcoming Ironman. I recently lost my training buddy for this awe-inspiring endeavor and almost felt like I lost what it really needed to cross that line. I think I'm back on track now.

My thoughts have drifted back to my washer and dryer. They are doing well, but with a day like today my housemate and I prefer to put our clothes on the line in the backyard. That does cut down on energy bills, but as we all know it's very important to not stick exercise clothes with Coolmax or other polyesters in the dryer. My main problem is the washer, or the discharge line. Since I bought the house the line has backed up due to improper plumbing design. My dad and I have tackled the problem several times. What am I going to do? I am saddened at the impending loss of my housemate, who is returning to Milan at the end of the month. I suppose the streets of Charlotte will be safer but still I weep for the death of the spirit and the soul. Winston too will miss begging for his amazing cooking, self-induced howling, and afternoon walks.

Many of you know about all the construction on South Boulevard. This is important to me because that street is the most direct route to my office. After nearly six months of finding other routes, mainly up Tryon or I-77, I am happy to report that I'm back on the beat. I don't understand the engineering behind the split between Old Pineville and Marsh. Won't the light rail disrupt the southbound traffic? The best addition to South Boulevard is the new Performance Bicycle - that's my little crack house. I don't understand why I have to get out of the car though - usually first class service goes a long way with me.

Speaking of service and cars, I've been having a lot of problems lately with my Volvo. We've been together for almost seven years now. I named him Aurelius before venturing out to North Carolina. For this past Thanksgiving I was out in Seattle looking for the perfect tacky Christmas tie (and boy did I find it!) On my return I found my engine was flooded (with gasoline). I took him to this Volvo/high end BMW shop near my house. They found the battery had exacerbated the problem. I didn't realize it at the time, but they only fixed the resultant problems but still charged me a great deal. I did experience their first class shuttle service. Upon picking me up at work the driver related several stories about a picking up a customer who was a dancer at Uptown Cabaret. For some strange reason he seemed fixated on her large breasts. But I digress. The engine flooded again at the end of February. I took it the AAA shop across the street from my house and they actually identified the source of the problem for a lot less. Too bad the mass air flow sensor part cost $370! But I do believe I learned my lesson. Ya got to stick to the Boulevard man!

The CPR Racing business appears to no longer be in business. This is bad news, as I was about ready to publish the results of a study I undertook comparing them with the Rock Shop (which tricks out jeeps). So I needed a new project. I crave data even worse than a cheap bike tire. So I am logging distance and times from various routes from the house to my place of employment. I've only taken data for several months (n=28) but I can share some preliminary data - my average commute is 11 minutes and 46 seconds. One standard deviation, which would account for approximately 68% of the points if normally distributed, is one minute and 59 seconds. There is a temporal component to the study, but I need some quiet time to understand the gravity of the research design.

The Boulevard is alive and well. Apparently Carousel is advertising jello wrestling. I'm not the kind of guy that would go in there, mainly because I identify with Uptown Cabaret. There is a new Chick-fil-A going in. Thanks to fact I usually try to avoid working on Sunday, it will great to always see it open when I zip by. The other day at the Burger King next to it there was a car on fire. Not just kind-of on fire, but engulfed-in-flames fire like you see in the movies. The firetruck pulled in as I passed by. It of course is that time of year to complain about those silly people from Liberty Tax Service that dress up as the Statue of Liberty and get people to honk their cars. I have not seen the woman with the USAT sticker, but perhaps a few months ago I saw that woman that walks to work up near the Scaleybark Library.

I did receive an interesting piece of mail this past year. A friend of mine from high school was working in DC for the summer and wrote in early August asking for my mailing address. I sent the information promptly only to get a soup mix package, a picture of which is attached. Much to his dismay I still have yet to use the package and have no inclination to do so. If you're like him and enjoy humorous "English" products butchered by foreign nations, try http://www.engrish.com

I must apologize to my long-time readers regarding the brevity of this missive and that it contains 42% less the usual numbers of obscure references and wit, but please remember I have been in hibernation. As strong as the OARM epiphany was, it is sometimes slow to regain ones former traction.


“It is a very sad thing that nowadays there is so little useless information." 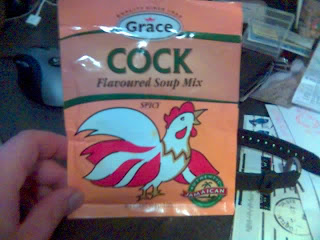