The Units Have Landed!

After all the negativity surrounding the previous week at work, I was very happy for Friday to roll around, mostly because my parents were coming into town for their annual visit! That morning I took my trusty "commuter" bike into work. I had to stop once to try and figure out where the rubbing was coming from. I realized at the time the skewer in the rear tire was not the proper one. I fought my way in, and on my return stopped on Euclid and finally concluded the skewer was not holding the tire straight enough. I managed to improve my lot enough to make it home.

And sure enough, there was my dad mowing the lawn. They were a little mystified to see the car there, and then my two other bikes! I guess the green monster, which got a very nice comment a few weeks ago, had all but been forgotten! Anyway, upon replacing the usual skewer the wheel was true, so my future commutes now look much rosier.

That evening we went to Las Ramblas, a "new" Spanish restaurant in Charlotte so my parents could meet Julie. The weather that evening was just tremendous, so we sat out on the patio. We tried some of their seafood paella, along with some tapas and the sangria. All were a little different than I was accustomed to, but nonetheless enjoyable!

I attempted to be to bed at a reasonable hour, as Saturday was my big 20 mile run day. I was up around 7:00 and out the door about fifteen minutes later. I had planned it to be a mixed run to get me through. The first solo run aspect of the route was up South Boulevard as I now aim for every Monday and Wednesday morning. However, the traffic was much lighter. Immediately upon turning out I found a crumpled dollar, so things were looking great! And unlike the normal run I continued straight all the way to Lexington, turning out to the Dowd. That took me around 35:10, or a 8.2 minute mile. There I met up with Kathy Abernathy's group, which was quite small today, maybe because it was post Boston or the CPCC Skyline 5K. Boston didn't stop the other runner, the strongman Joe Schlereth. For most of the time with our small group, Joe was actually in front. Kathy had to ask "where's the fire?" I obviously held a comfortable tempo (8.1 minute mile) with Kathy, along Joe was never far away. We eventually made it to Providence and continued up Morehead. I realized this was going to be short for my 10 mile sub-portion, so at Berkeley and Dilworth I struck out again on my own, firing up the iPod Shuffle (which I've started to run more with) and looping near the Freedom Park area. Once back at the Dowd I took a relatively long break. The last portion south towards home became quite hard. On Reynolds Drive I noticed what appeared to be a decent-looking CharBroil grill on the side of the road with a "free" sign. Wow. When I FINALLY came around the bend to Wexford I clocked in at 2:57:05. I didn't know the mileage at the time, but later figured it to be about 21.1 miles, which comes to a 8.4 minute mile pace. The good news is that is around my target for the upcoming marathon, to finish with a 3:40. That represents my longest run ever that wasn't an official marathon.

After gulping some water, my dad and I drove back up South Boulevard and found the grill waiting for us. We spent a little time looking it over closely, apparently the burner was bad. You should have seen us trying to fit this huge thing in the trunk of the Volvo! We drove back via the same sideroads I took versus attracting any attention on South Boulevard.

That afternoon was a very neat experience. Julie came and picked us up to head down to Union County. No, not for Steeplechase, which was on Saturday, but for the Spring Festival at Mitey Riders. Mitey Riders is a therapeutic riding center just south of Weddington at Misty Meadows. The event was more like graduation for the riders, since they ride through the school year then take the summer off. This was way better than Steeplechase. It was actually quite warm/hot out, but we did find enough shade. Julie led for the two classes she volunteers for, I can't say enough about what a great thing this. The only downside was that I happened to be barely functional after my run, and the direct sun and standing on my feet did NOT help. 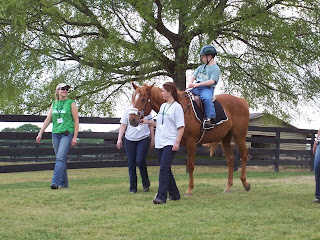 On our way back I decide to navigate the scenic route, which meant not taking any interstates. We turned onto Rea Road. From there on entails my usual bike route to Waxhaw. This route also let us stop and explore the Trader Joe's in Piper Glen. It was my first visit to this store and we made sure to stock up on everything. Also before returning home I was able to show them the house where Charlotte's closest Larry David approximation resides.

Julie returned that evening for our salmon dinner, which was most excellent. We then watched the "International" version of the Twin Peaks pilot, which has an alternate ending that I had never seen. It really closes the whole premise of the future episodes; I think that is the main reason I didn't like it all that much.

As if Saturday was not enough punishment, I was up at 8:00 to prepare for my bike ride. The weather was looking a little iffy; thunderstorms were forecast but the decision was made to go for it! At first I was feeling really sore, but then it turned out all right! I do regret that inside of heading north towards the Inside Out Sunday ride, I ventured out on my own. It was a small variation on a route I coined back on March 9th, the main variation being the tough climb up Arrowood and my first ever journey down the backside of Sandy Porter (and our Whitehall property). I then made my way towards Fort Mill and climbed back up Sutton and eventually up to Shopton. Despite the dark clouds blowing over above, the weather was quite pleasant with no precipitation. I logged slightly over 50 miles and averaged 17.1 mph, which is solid for a solo ride, especially I when I was trying to "take it easy" and recover from the tough run yesterday.

After finally getting my hair cut, the next to go was Winston! Actually, even with his flea and tick medication, he's been scratching a little too much so he got a bath! He sure doesn't like it, so I had to pick him up and put him in the tub. The reality though was he was a decent sport - he just stood there while he got showered and scrubbed.

That afternoon the four of us went to a nice little streets arts festival in South End. From there the Bodiens headed south to Costco, to rediscover those Kirkland roots! It's just like Starbucks, how can I be from Seattle and not drink the coffee. But give me a break, I couldn't justify buying the tubs of butter! We were going to celebrate the now functioning grill with some lamb steaks, but the rain did finally catch up! That evening I finally got to catch up with the two Battlestar Galactica episodes I had missed. For the record, I have only basic cable and there were two shows/events I would consider paying up for- one is Duke basketball and the other is Battlestar. But thanks to Hulu I am not being deprived!
Penned by Publius at 20:38