Bunnies and Winston do NOT mix

It's true. I've let my lawn grow out of control. Yes, I'm the lawn pariah of Madison Park. But thankfully today I did something about it. And with a brand new lawnmower. First off, big thanks to my old neighbor Dave for giving me a working lawnmower when I moved down South Boulevard! It lasted three years. Maybe it still works with just the right kick.

Anyway, my lawn was so high I must have attracted the attraction of the local bunny population. For the first time ever, I have noticed two adult bunnies. Winston has noticed them too, chasing one all the way around the cul-de-sac about a week ago. But a couple of days ago, one morning when Winston and I were playing out on the lawn, I noticed a very small/young bunny just sitting totally still in the tall grass.

So when it came time to mow the front lawn, Winston came out with me and I immediately found the small bunny. You do have to understand it's hard-wired in Winston to hunt small game. He went totally crazy grabbing the smaller bunny. I managed to get there before any major damage was caused. Later I think I found another. Winston got to the point where he would not listen, so in he went while I finished cutting down the jungle!

Afterwards, I got a shoe box and scooped up one (of the two?) small bunnies. 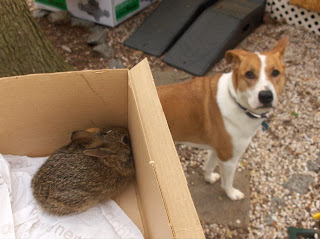 I hopped over my back fence and let the scared little guy run free in the large grass lot. I couldn't help feel like I was turning into my neighbor from where I grew up. You see, Greg got quite a reputation for trapping squirrels and taking them to Lake City (where many moons ago they had another floral shop). Am I going to start loving NASCAR and goats next?

SATURDAY UPDATE: After a 17.5 mile run, which involved running some short spurts with those doing the Charlotte RaceFest Half Marathon, I was out working on my car (attempting to install a CD receiver). I had let Winston roam the yard assuming I was wrong about the second bunny on the grassy knoll. Much to my surprise I knew that was wrong the instant I heard what sounded like a squeaking toy. My neighbor Monty was much closer, washing his car, and actually thought the same thing. I jumped out of the car and cruised over to grab Winston. I told Monty about the rabbits. It was another young bunny, perhaps a little more roughed up than the first, but not really injured. Monty got a empty cardboard box for me and this one was a lot more difficult to locate and capture. We actually let Winston go for a moment to sniff out his exact location. I eventually got enough of a hold to put him in the box. Monty then let the bunny out in the woods in back after his daughter got a look.
Penned by Publius at 22:06