Earlier today I was reading McNellis' Camp Parsons blog about a dear friend of mine, Billy Price. Despite the fact that he is a quadraplegic it turns out he is an amazing skiier! Billy has been my hero for many many years. He's made the best out of his situation and I try to do the same.

On these related subjects, this past Wednesday I went back out to Lowe's Motor Speedway for my fifth crack at the 10 mile bicycle time trials. Before I go any further, I was to clearly denote I hate NASCAR. Bruton Smith is a class-A slimeball; I only tolerate showing up by his counterpart, the amazing Humpy Wheeler. And yes, and I appreciate Jeff Burton since he chose to place a conservation easement on his property outside of Huntersville. But other than that...

My first attempt was on June 29, 2005. Each time it really is an amazing experience to ride around the track and give it everything you got for seven laps (10 miles)!! At the time I was riding my Trek 5200 - I put in my slowest time of 27:49, an average of 21.6 miles per hour. For the record, that was the hottest recorded temperature at 86 degrees. I came back once more that year in September to shave off 9 seconds, then my final attempt with the Trek 5200 was in May next year where another 16 seconds came off. That was the first year that my dad participated. 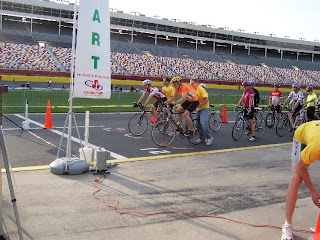 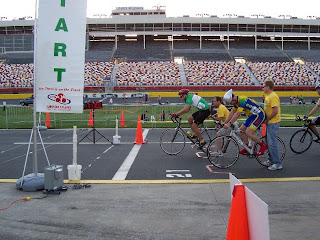 In 2007 I only came out once, again in May. This time I had a new bike, my current Trek Madone named Holman. I really smashed my best time clocking in at 25:50! My goal this year was to at least match that time, so I had my splits taped to the bike. I really had no excuses with the weather either. Perhaps though the best part is my parents cheering me on! For those not aware, this course is not flat. The backside is mostly down where you can gain some serious time. This year I maxxed out at 27.4 mph. It's then a tortuous climb along the front side. This year I did not shift out of my big gear, trying the advise of the wise (?) Steve Watkins. 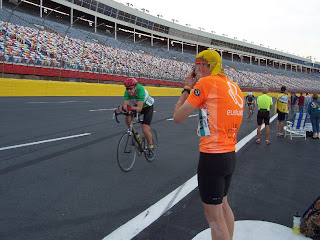 Just like the 5K at Run For the Money, the reality was I was not prepared for such a short burst of high intensity work. I saw my seconds slowly tick away on each lap. Like most others, I pushed it to the extreme and pretty much felt like hurling the last twenty minutes. It wasn't a terrible showing though, I came in at 26:18, a 28 second drop from my PR last year. This averages out around 22.8 miles per hour. That puts my overall average from the five attempts right on 27:00 minutes. 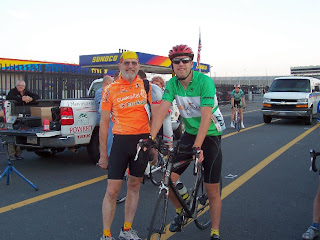