For Julie's birthday I picked up a copy of the recently released "gold box" version of all the Twin Peaks episodes. This series was obviously a big deal to those like myself who lived in proximity to North Bend around 1990. Anyway, it's been a lot of fun to relive the greatness, and what a beautiful set- finally complete with the pilot episode that was missing in previous editions.

The big focus for the weekend was the Run For the Money 5K, held in neighboring Gastonia Saturday morning. While I have run in the race since 2004, this marked the second year that I have assembled a team to crack the $12,500 purse. Last year the runners raised $3,500 for Catawba Lands Conservancy. And like last year, I was hoping to use the race to pass the magical twenty minute mark. My previous best was at the race last year, 20:35.

The atmosphere at this event has always been quite positive. I really enjoy it, although some of the people weird me out. But then again, people do that all the time! 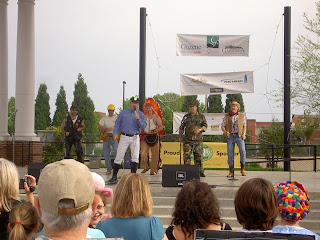 Some of the weird stuff you see when you come to Gaston County...

So I was really nervous about all my runners getting there and signed in, so I made the rounds to check through and thank them in advance for coming out to run for the Conservancy. With the race planting on the same weekend as the fabled Boston Marathon, and a large contingent prepping for their Ironman race with the Kinetic Half, there was a lot of turnover from last year!

At the start of the race I erased my mistake from last year where I went out way too fast. I paced behind Sean. As the runners started to stretch out over Long Avenue, my thoughts were not on my run but the position of our star runner, Paul Mainwaring. Last year's male winner was back, and his 16:40 was even too much for some star-studded 2007 team. Paul clearly had the legs and determination to break this slot. I was able to see Paul and two other runners start to distance themselves. For a complete perspective from the run, I recommend reading Paul's race report. Much more visible was my concern with my favorites to take the female overall. I carefully watched the position of Melissa "Ma" Bell and Rebecca Thomason with regard to previous second place finisher Allison Bumgardner. There was another woman Wendy hanging further back as well.

As for me, I just faded and didn't have the moxie to improve on my time from last year. It's really no surprise, I do absolutely no speed work - never show up at the track, and focus exclusively on endurance. You reap what you sow, period. Big deal. While it was mostly me fading, I was also happy to see teammate (and fellow Madison Park resident) Melinda Yelton pass me up. I was certain at the time there was no other F40-49 racer in front. This would turn out to be my biggest surprise.

I knew the gradual climb up Main to the line would finish me, but I pretended like it mattered and came across at 21:29. The good news is that still under a seven minute mile pace. And everyone knows this course is long at 3.18 miles! I was just dying, and thanks to Keith for cheering me in! I immediately sought out Paul, and the news was great! He had edged out his two competitors for the top slot with a 16:16 effort - $1,000 right there! And apparently Rebecca and Melissa came nearly together with Rebecca "the sandbagger" edging out Melissa. I was very proud of both of them!

Here are the official results from the race.

Before I list the totals, I wanted to give special thanks to Sean Welsh and Marie Winget for returning for a second year to help the Conservancy. Last year Marie was able to place but due to a stronger female contingent wasn't able to repeat. Sean had "graduated" to the M40-49 category but the competition there was way stronger than any of anticipated. I also enjoyed meeting Ron Zurinskas, who came out to run. And one of my team members from the 2007 Blue Ridge Relay, Ryan Yowell, came out a ran a strong sub 20 minute race. Ryan actually placed second in the age group, but was disqualified because his age wasn't listed on the form! What a load of crap! 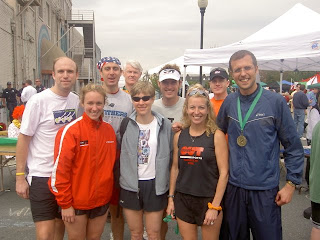 2008 Catawba Lands Conservancy Team at the Run For the Money 5K
(back, L-R) Scott Bodien, Sean Welsh, Mike Murphy, Keith Mrochek, Ryan Yowell, Paul Mainwaring
Melissa Bell, Marie Winget, Rebecca Thomason
Not pictured: Melinda Yelton, Ron Zurinskas
So in addition to money raised through the foundation, the Conservancy will be awarded an extra $3,750!! That's a slight improvement from last year. Like last year, my initial analysis is that no other non-profit took more than a thousand dollars. We rock!

For those that have not run a 5K before, it's basically everything you got, somewhere around 16-21 minutes of wanting to throw up. Most people just assume it's easy because it's short, but when you race to win like all my team members did, it's really a tough ordeal!

Later that afternoon Julie and I went to a bowling party in Huntersville to celebrate two of her co-worker's birthdays. It started off badly, in that we were caught red-handed trying to bring in "outside food" (the birthday cake). And then on my first attempt I stepped over the line and slipped, causing me to go on my back like a turtle. How embarrassing! Thankfully, I recovered and bowled a 131, which was the highest score! For the record, whenever I bowl over a 100 I am happy! I think the last time I went bowling was in January of 2006 for Lisa Palermo's birthday party. I bowled a 89 and then a 111, just to give you an idea. Usually though, I start well and slide off, which is what happened for the second game in Huntersville. I ended up just shy with a 98.

Afterwards Julie took me to the Midtown Sundries on the lake, which was quite nice! And of course, there had to be more Twin Peaks!!!

Unfortunately I missed the group ride on Sunday morning, so around noon I went out on my own. The cloud cover was constantly changing, with some very ominous-looking clouds passing over my way. The headwind was quite strong. Disaster struck shortly after mile 14 when I was crossing the Catawba River on Highway 74 (Wilkinson Blvd). By disaster I mean flat tire. I was really slow and meticulous, but it was changed and unlike last time the spare didn't blow up in my face. I did have to ride on a soft tire for the remainder of the ride. The route then took me up Cramerton Mountain. It wasn't as labored as in the past, but perhaps I was just taking it slow. For a new twist I used Beaty to connect to 274. Once I was on Patrick I was able to do some serious hammering, which felt REALLY GREAT! From there I was back on 49 and crossed up my usual return on Shopton Road.

Well, tomorrow is the Boston Marathon - I am extremely excited for my friends competing in the greatest marathon in the world.

Finally, big congratulations to Pineville's Megan Hepp, who finished TWELFTH with a 2:37 in today's 2008 USA Women's Olympic Trials Marathon in Boston. Outstanding.
Penned by Publius at 19:24