Yes, Winston does occasionally pick up the doggie briefcase and head off to work. This morning on his way in he was not quite as excited as his owner to spot Deloitte Walking Man. Since we left a little early, he was spotted walking north on South Boulevard once again near Greystone. The timing was consistent with the Monday sighting.

Once we park in the back (I am the sole full-time remnant of a bye-gone era of back-building parkers) Winston gets out and gets all excited about spotting the cats that he has seen many times. Unfortunately for Winston, I haven't told him they are long gone. The mother died several years ago and the fate of the daughter is unknown; I know she was evicted during the last round of building renovations (better known as junk removal). 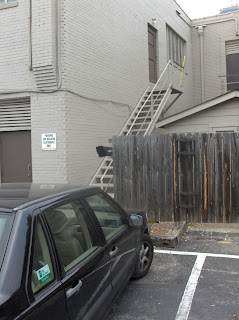 Every day I drive the back entrance await me. It's like "Return of the Jedi" but without the Ewoks.
Winston then runs straight up the rickety metal stairway to the door. Using my usual dexterity, the door is opened and Winston always rushes in, eager to greet EVERY member of the Conservancy. He is known by all and never leaves any of his friendly tendencies at the door.

On most visits his dad has to spend about 10-30 minutes preparing materials for field work, but today that lasted ALL the way to 1PM. How lame is that?!? Thankfully several staff members got him all riled up, and yes, I did throw the Kong a few times! 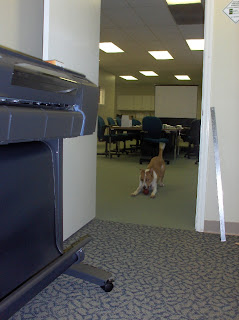 Winston was so bored waiting for me!
Our destination this sunny afternoon was north of Lincolnton on the Catawba/Lincoln border. My task was to establish new line for the surveyor coming in tomorrow. It turned out to be a lot more brutal than I anticipated. After crashing into the woods I received one of the most painful yellowjacket stings of my life! Seeing how I was in fragile health to begin with, I then got an amazing acute headache. Still I stumbled on, marking with my pink. 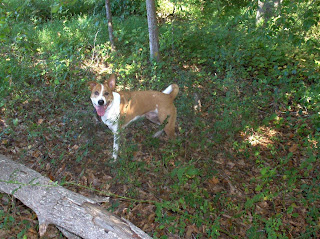 Now we're talking!
We then faced a precipitious descent to the wetland below. While I was getting the life (blood) sucked out of me, I took some nice shots with the sun and beech trees. 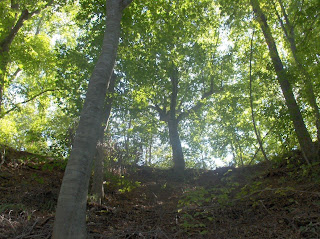 I died a little so you could enjoy this
After tying up to existing line, I hightailed my little behind out of the wetland and into the even worse recent clearcut. Anyone who has walked the woods can tell you this is the most dangerous and difficult type of walking. It was even slowing down Winston! From there I marked some points for the irrigation easement, then tried to make a call. 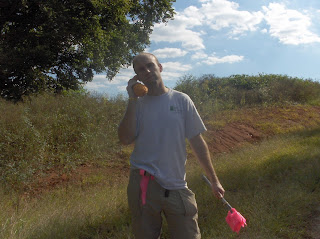 Why won't anyone talk to me?!? 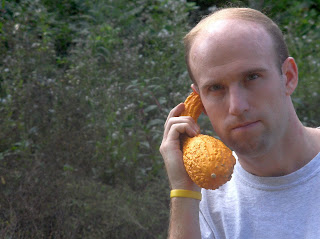 Leave a comment about the tagline that should go here
After an equally long 50 mile drive into the office, Winston was actually showing signs of being tired. 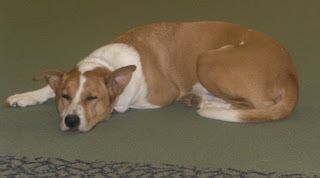 Another great day for Winston!
Penned by Publius at 18:24