Can you say "Restraining Order?"

Over the last two days I've had two interesting observations of DWM (Deloitte Walking Man) so I thought I would share with the rest of the stalker community.

Normally I never run on Sunday, it's my day to bike, but with feeling very run down I only took a short run on Saturday. Sunday was my "long run" day and my route barely scrapped in ten miles. Besides enduring the long Ironman recovery process, my hamstrings are on a delicate perch, and perhaps my most serious concern is a mysterious swelling of my left foot. I have gone to two doctors now and neither have any clue what is going on. So when it came time for Monday's run into work, I was DREADING it.

The only ray of sunshine was as I approached Greystone on South Boulevard. There was DWM walking north! So I passed him from behind and said nothing this time, I was wondering if he was going to yell at me about the whole camera thing. Apparently he hasn't noticed? I then stopped at Marsh waiting to cross the street. So even then I was able to look back down and see him approach. Today I made a new modification to my standard run in by taking the lightrail "pedestrian" path ALL the way in. I used to think it ended at Camden but Ma Bell opened my eyes up a few months ago. I was a bit stunned to see that it was 4.45 miles versus the usual 4.4 taking Camden over.

What a horribly depressing day to be in Charlotte. We still have no gas and there is no concrete explanation why this is happening. Oh yeah, and Wachovia is being bought by Citi. And the bailout failed. WHY WAS MY APPLE STOCK PUNISHED?!? Apple is the only company out there putting out superior products and making tons of money. It's proof to me that stock performance has nothing to do with the actual company.

I left the office around 6PM and took the harder of routes home. On the way I saw an injured Sean on Cumberland so I stopped to talk with him. Apparently Jocelyn runs too fast for him! Ha ha! At least it's not some sort of protracted running war like with Stan... Apparently they finished together at the Hit the Brixx 10K (I actually got to see the lead two runners on Sunday) But who actually went across first?!? Once I got home I took Winston for a quick walk, then had some dinner and felt like crap the rest of the evening.

Getting up Tuesday morning was even more painful. I managed to get to the dentist for a routine cleaning. I then went back up Park to Woodlawn (one of the three stations there had gas - and the long line blocking traffic that is a common sight these days). I then took Scaleybark up towards South. The timing was a little late but I was rewarded! While I was waiting for the light to get on South Boulevard DWM had gotten to the point where he turned on Scaleybark. He was passing the library completely! He was wearing his standard red coat for this time of year and had some coffee. I was able to snap a photo before turning onto South! 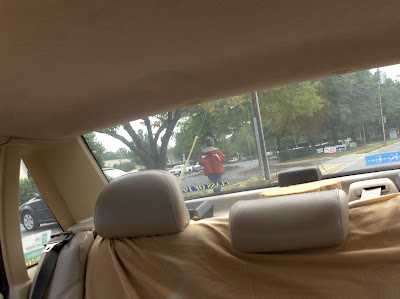 Was a little too shy about getting a frontal...
As it was a Tuesday this was my swim day, but I was just feeling awful and Tuesday is definitely the most miserably full day of my week. The worst part is I missed swimming last week due to the cable being repaired at my house. I think I made the right decision to stay away.
Penned by Publius at 10:29

For the record, and ONLY to satisfy your curiosity, I did cross the line first. But she's probably in better shape right now.