Who is this man?

With the supposed demise of Old Asian Walking Man, within the last year my South Boulevard fixations have been on a man I've documented fifty plus times. My name of this mysterious individual is DELOITTE WALKING MAN. 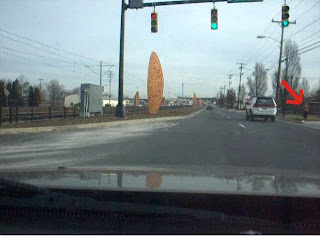 From a February 15, 2008 sighting on South Blvd 900 ft from library.
This is a typical location for sighting DWM.
This Caucasian male is in his 50s and sports a white beard. His most distinctive features are a blue Deloitte sweater and often he carries an umbrella. DWM has a very tempered regiment of walking south down "The Boulevard" to arrive at the Scaleybark Library minutes before it opens at 9AM.

Given my proclivity to be heading north towards work to arrive minutes before 9AM, it is usually a safe bet I will see DWM. I have so many questions? Was he an employee of Deloitte? An accountant? I am running under that assumption and that he is retired. Or could he just be homeless? During my documentation project, I do note his approximate location upon sighting and reference it as a distance from the "destination" (the library).

I have seen him waiting with the 9AM crowd several times. Many in the crowd are homeless who spend the day there reading, etc. I also have some rare documented sightings on the residential streets generally east of the library (down Scaleybark, on Poindexter, etc)

Perhaps my most treasured sightings have been when I run into work. We actually pass! I have not worked up the courage to ask him about his veiled past, although I have initiated verbal contact with a cheerful "hello." He has never responded.

For now I am frustrated with no answers, but given a recent breakthrough Rebecca has learned much about the mysterious Dilworth runner who Cummins and Woodbury, along with many others, have wondered about for far too long.

The odyssey continues...
Penned by Publius at 22:22