Hmm, can't say that Tuesday (yesterday) was all that great, considering I started out by biting my tongue badly the previous night during dinner. The damn thing bled for ten minutes and by the morning it hurt to chew and swallow. Even worse was my food had no taste! For my day off I had to get up early and go into work for my annual review. It wasn't exactly a feel-good experience, especially given the overall larger economic situation. I'll readily admit I overstressed myself with teaching this Fall at Queens, but it still hurt. That said I am genuinely thankful to have the job I do and hope 2009 will bode well for not only my organization, but others as well.

One bright spot was that upon my return home I prepared my bike Holman for a special ride. I remarked in a previous entry that I had ridden Holman ZERO times on a Tuesday - well today that would change. Another interesting note about today's ride was that for the first time since June, I actually drove Holman to the start location (this applies to non-races). I suppose that's a mark of the plummeting gas prices, but day traffic around my area made me feel a little less comfortable.

My destination was (soon to be?) the old Charlotte Knights stadium, which is actually located in South Carolina off the Gold Hill Road exit. It's about ten miles south of home and I've ridden a number of variations. Normally it's a clockwise loop, so I decided to head against the grain with a route going counterclockwise. The initial climb out over I-77 along Gold Hill was quite windy, but then heading south on Pleasant/ Sutton was a little more manageable, but with more noticeable climbing were I to be heading northbound. After crossing over I-77 along Sutton, I continued up to the town of Fort Mill and then dinked around on some side streets looking for the alternate route I found some time ago to hit Doby Bridge. For some reason I really dig this road, although the pavement isn't that great. That's what South Carolineans get for less of a gas tax!! Normally at 521 I would turn around, but I decided instead to try my hand at heading northbound. I cruished this section hard. The real new experience was heading east on 160 - the road was crappy with lots of traffic. Hmm, probably wouldn't do that. After crossing the river I was back in familiar territory, as I labored up the hills and then tried the new sections of 21, finishing with a little old school section on Gold Hill Road.

My best solo performance in a non-race situation was actually last Friday, when I did a 52 mile route in NE Florida where I averaged 19.2 miles an hour. Besides the time trial and Latta, there was only one race that featured a faster average (Take Flight). 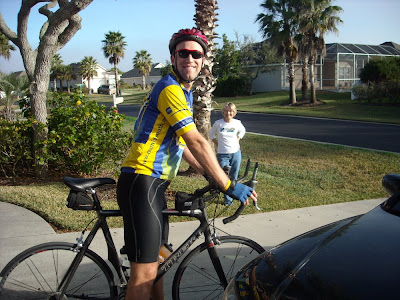 Leaving for my Florida Ride Last Friday. Yes it is flat there.
Penned by Publius at 13:47