As I was rudely interrupted yesterday from my run to work and home, that evening I waited until twilight to head out for a route I dub the "Madison Park Long Run." Not really long, but following most of the bounds of South, Tyvola, Park, and Woodlawn that make up this neighborhood. My GPS had excellent reception and put me at 5.78 miles, which after looking at other data believe to be in the correct distance neighborhood.

Since I last ran clockwise, I opted for the more popular counterclockwise version. It would seem to be easier with the long drop along Tyvola before jumping into the woods, but if you look at the elevation profile from there it's basically a long climb before the Willow Oak steps and home. My PR for this run (and direction) was 44:39 in March of last year. It was pleasant running for the most part. I had neglected to turn of the 9:15 pace warning, but thankfully it beeped at me only a few times. I felt much stronger and huffed out a 46:31, which is about a 8:03 minute mile pace. This was my second best effort on this particular course - not too bad!

I mention the run because I came into today feeling like I had to hold off on today's swim, mainly because I was worn down from the run and that I would be playing Ultimate tonight. While I was in the "mini gym" Cliff asked me why I spent so little time there. Before leaving I weighed in at 181 pounds, which represents a slow drop since my high with the months following my Ironman Vineman. 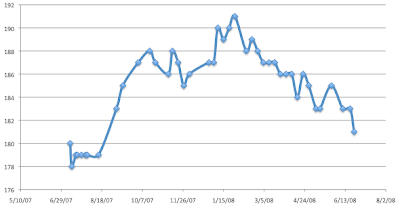 There was a little hurry to jump in the water, but not much. I felt very comfortable with the strides and hoped I wasn't lulled into another monster session. That "fear" slowly began to rear it's "ugly" head at 700 meters when for the third time I broke 15 minutes, clocking in at 14:58. About five minutes later I became to think about the fact this could be the day I made it to 15 lap (1500 meters or 0.932 miles) territory! Of course I had not dared to take a real "halfway" mark at 750 meters! During that I was driven on by my wild fantasies. No my friends, not of beautiful women, but winning an Ironman with a world-record time. I can't see how the first fantasy would improve over my already questionable aerodynamic shape.

Not that I was too high on my horse. Most of the swim coaches hanging around probably think I'm some sort of flailing fool. No doubt my technique sucks, I've never really had any sort of teacher. But I tell you what. If I can consistently swim better at short distances than someone like Mona Baset who swims regularly and spends hundreds on classes and instructors, why shouldn't I feel good? Same thing for a naturally amazing athlete like Chris Cummins, who obviously works 8 hours a week and trains like crazy. I swam my 2.4 mile leg of my Ironman faster than him and probably put in 1/3 the effort. Damn I'm lazy. But the swimming is so relatively unimportant. Somewhere in the 75 minute range for 2.4 miles is solid. It'll never win you a race, but why spend all the extra effort and money? After yesterday it's clear I don't have any money, so that's a no-brainer.

I was thinking about all this as I drove out of the parking lot. As I went down McDowell I saw a man running that looked very familiar. Oh my &$% - was that DAVID HOGEBOOM?!?!? A later discreet inquiry to the my spy network revealed it was in fact the man who had vanished into the mists of Bank of America.

When it came time to change into my Ultimate gear, I realized I had forgotten my sandals. So I had to leave the office and come on the field in my ultra fancy brown suede shoes. 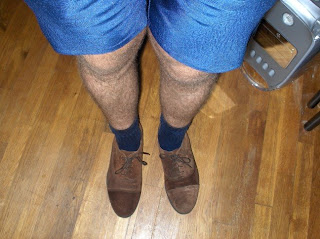 I had hoped nobody would notice but Trevor was right on me - "Hey Scott, nice fashion statement!" D'oh!

Anyway, temperatures were in the mid 80s with lots of direct sunshine. Definitely not as hot as last week. This past week our default captain had quit the team because of an injury. I am quite certain that given all the teams I've been on since 2001, not a single captain has ever "quit." Well, as far as I'm concerned, good riddance - she was very unfriendly to me and was not adding much. The replacement she promised never showed. Our other captain JB had an anti-cheer approach. For our first game we were pitted against Jeff's team. Jeff is VERY tall, at least six to eight inches on me! I used to be one of the few that could have any sort of chance against him. I have lots of memories from Pearl Street years ago of him beating me again and again in the endzone.

In the very first point I had to defend on him and he just beat me again and again. The difference of course was that Jeff has continued to play and continued to become quite good. I like the guy a lot, but it was humiliating, especially for one of the few that wasn't overly mismatched on height. It was a tough start, but then the weirdest thing began to happen - we were winning! I have a ton of respect for our woman Rebecca and Lisa. Rebecca seems to have to play savage for the first half hour until Lisa gets there. And then Lisa was not just a scoring machine, but handling extremely well. We ended up winning our first game 13 to 9!! Way to go Seven Minute Abs!!

We remained on our field and went white for our next game. This was the team with Nick Vincent, one of other few guys on the circuit taller than myself. The competition was much more stiff but we managed to hold 3-3 to half. During the evening I had several breakout plays. I took down one score on a short play thanks to some quick thinking to break my man. Then in the second game I broke long to chase down a long floater down the line. Unfortunately I didn't catch at the endzone, but I dumped back and then watched us score - yes! Later on I was running down the same corridor and had a chance for the score and a nice stretch move. I went up with my best Air Jordan using only one hand and ended up looking like Lisa Jacobellis at the 2006 Winter Olympics. Later on I had a few more frustrating plays. They made a series of questionable calls and the game slipped from our grasp. Thankfully I didn't leave the field in a bad mood. Our team continues to improve and I survived a tough swim today and an even tougher evening of Ultimate.

I'll leave you with some photos of my favorite league team so far. 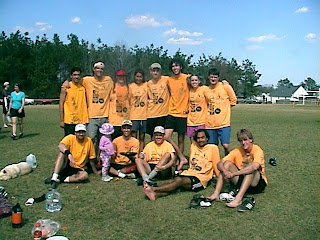 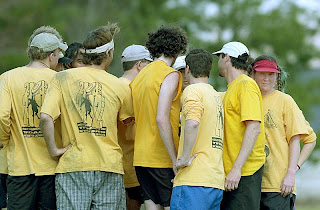 The Great Kwat Huddle - co-captain Mel/Momkwat/Melkwat looking back, I'm on the far left 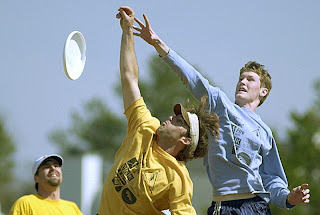 Christoph going under to deny with co-captain JP watching 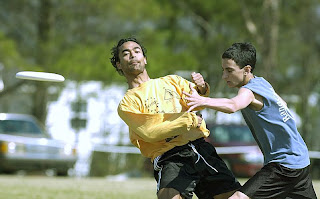 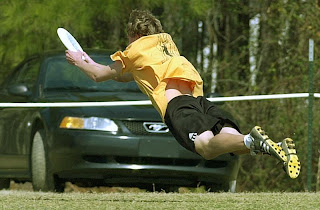 Josh leaping for the catch! 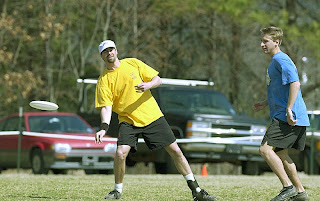 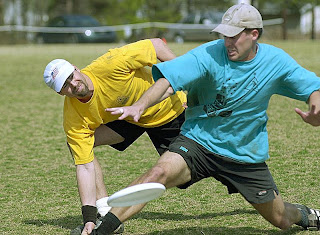 JP going low to get the job done 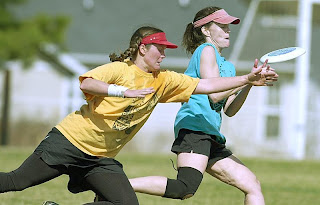 Mel with the stellar D! 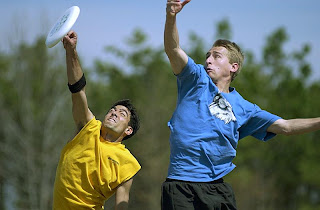 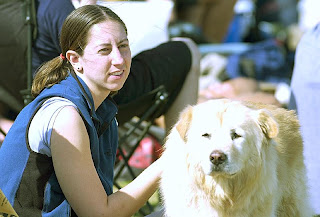 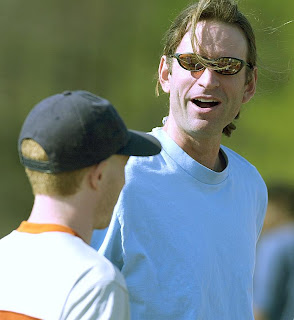