Props to the Ironmen!

Today was a very special day in the Ironman world. Eight of my colleagues from the Charlotte area, who I am honored to call my friends, finished Ironman Couer d'Alene in northern Idaho.

About the time they were jumping into the 59 degree lake to begin their odyssey, I was already on the bike, out for a specific purpose. I rose around 7AM to leave for a group ride that started at the Dowd Y. Instead of the usual Inside Out ride, that was meeting at the same time, I cast my lot with Mona's group, who were setting out to ride the Cramerton Mountain Loop. I chose this group so I could ride at a slower pace and a shorter distance. After the Latta Sprint, I knew I had to hammer my brick workouts for my Half in Providence to have any reasonable success. There were five of us that then began our ride out on the normally (and shady) Wilkinson Boulevard. My particular route, which included the trip north from home to the Dowd Y via South Boulevard, took us through the usual Belmont and then Cramerton streets. Using my Garmin, I then took a lap time for the climb up the mountain. Hopefully I can use the 3:40 time to gauge my strength in the future. The weather was mostly overcast, but very warm and extremely humid. Once at the top Mona had a flat, so then then there were four arm-chair bike mechanics as one worked! The detour work of Neal Wallace continues to persist, but I did notice some work in finishing the straight leg along the east side of I-485. I then took my leave of the group at Yorkmount, cruising home along Tyvola. I covered a little over 42 miles around 16.1 miles per average, which is exactly what I wanted.

From there I jumped into my running shoes, lost the shirt, and began what I hoped would be a 8-9 mile run. My goal here was specific, to do better than a 9:15 minute mile pace. This is the magic threshold for me to run a half marathon portion of the Half Ironman in less than two hours. I doubt that will happen through the hilly area of Providence (I have run there!). I really began to suffer on this run. The route, which I mostly made up, took me up to the north end of the Park and then back via my usual set of streets, which included the Marsh climb. I did spy my coworker Jenni working on her front yard as I tore into my reserves. I was really hurting upon my return, but the great news was that I covered my 8.62 miles in 1:18, which put my pace at 9:06! Mission successful. Where is my aircraft carrier when I need it?!? Now if I can just run at a 9:00 minute mile pace instead of this descending madness I'd have more of a chance! 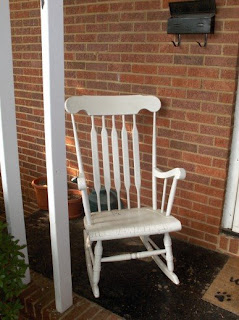 After sitting in my new rocking chair (thanks Sharon!), which I put on my small front porch, I got around to mowing the lawn. It certainly has been some time - my dad mowed it about twenty times while he was here, I don't think it's seen the sharp blades since. But truthfully it has grown very slow with what appears to be more general lack of rain in this area.

Later that afternoon Julie, Winston, and myself made our second trip to do some hiking at McDowell Nature Preserve. I tried to fashion a route that covered some new trails. It was certainly quite hot and humid, but underneath the forest canopy quite nice! While my GPS didn't kick right away, I would guestimate we hiked about 3.1 miles. While it seemed like a lot of work, it was so much easier than all the brush-crashing I did on Saturday at our Bragg South property. We picked up some Chinese take-out on the way home and Julie went through the mandatory viewing of The Princess Bride. Imagine the horror that she hadn't seen this absolutely fantastic film. Thankfully there were no R.O.U.S.es in my weekend!

Special props to the bald one for his 5:11 time to complete 112 miles on the bike. Steve finished 85th overall and took one of the two coveted Kona (World Championship) slots earned by the North Carolina athletes!!

I am seriously considering doing this Ironman next year. It is the closest Ironman event (in the US) to Seattle and peaking in June makes all the sense in the world given the climate I live in.
Penned by Publius at 20:59