Back in the beginning of December, Julie and I met downtown to see an exhibit at the Light Factory, which is in Spirit Square. The title of the exhibition was "River Docs," featuring photography of the Catawba River from many perspectives. This exhibit opened in November and is still open, running through February 22nd. My employer is one of the sponsors, but the main reason I went was because one of the three main photographers is Nancy Pierce, a friend of mine who has generously donated many outstanding photography work to the Conservancy. It was a fantastic exhibit!

I thought we were about to leave when Julie mentioned there was another exhibit next door that she read about online. So we sauntered over to the space next door. This exhibit was entitled The Stray Shopping Cart Project. At first I saw a couple of smashed shopping carts in the center and some more pictures on the wall (virtual tour). Of course my first thought was - WTF?

And then my life changed forever.

Folks - this is unbelievably clever. An intricate scheme to categorize stray shopping carts. If fellow Swede Carl von Linné (a.k.a. Linneaus) had been alive today shopping at Target for his wig curlers, he would definitely take note! The beauty for me lies in the object is taken for granted by so many people, and it would seem like no one would care that this ubiquitous and seemingly now useless object could now be seen in a bold new way.

Word on the street is that creator Julian Montague takes his collection seriously. I heard that at the opening event (which was the same night as River Docs) a co-worker's boyfriend made a comment about his book (The Stray Shopping Carts of Eastern North America: A Guide to Field Identification) being located in the humor section of bookstores, and Montague did not take too kindly to the rue.

Now I am always on the lookout for stray shopping carts. I bought several books as Christmas gifts, and always jump at the opportunity to argue whether that's a B-4 or B-5. I am particularly keen in my outdoor work responsibilities to document some fantastic B-21s (naturalization). Perhaps the best part is that you can photograph your own stray carts in the wild and upload them to The Light Factory's Shopping Cart Flickr collection.

May the Stray Shopping Cart Be With You! 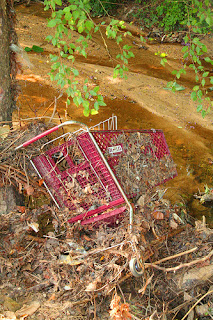