In Memory of Phoenix

On Tuesday morning Winston and I lost a good friend. My co-worker Sharon had to put her 13 year old dog Phoenix to sleep. "The Old Man" was one of several dogs to grace the Conservancy offices, and miraculously survived a massive heart episode a number of months ago. He could have easily expired in that field, but that was not his moment.

Winston stayed with Sharon and family (including Phoenix) when I was in Seattle for Christmas. Apparently for the most part Winston was well behaved around Phoenix. I remember when Winston was a little obnoxious puppy jumping all over the older dogs, specifically Fred and Tristan.

For the last few months Phoenix came to the office he would slowly labor his way up the steps, but would always find the energy to roll over so I could rub his belly. 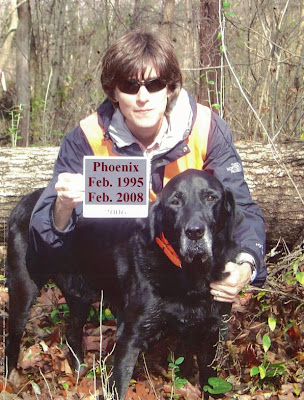